x
Cookies help us deliver our Services. By using our Services or clicking I agree, you agree to use of cookies. Learn more.
I agree
Custom Student
Mr.Teacher
ENG1001-04
April 22, 2018

It is impossible for cats to balance properly, climb, and defend themselves properly without – guess what? – their claws. Cats’ claws are much more important to them than humans’ nails are to humans. The damage of not having claws is about the same for cats as it is for humans losing their toes. Therefore, it is important for people to understand the impairment of declawing – the procedure that removes not only the claws but also bones and cartilage that holds them in place.(1) There are many ways to avoid declawing and save cats from this quite stressful procedure.

Declawing is banned or severely restricted in more than twenty countries, including Japan, England, and Australia.(2) In some countries, for example, in Spain and Catalonia, declawing Is prohibited by the Law of Animal Protection.(3) In West Hollywood, California, the City Council passed a declawing ban as well. After it was passed, the court invalidated this law because it decided that it violated veterinarians’ professional rights. However, the San Francisco Board of Supervisors adopted a resolution that disapproved of declawing and advised veterinarians to give up the procedure.(4)

Many veterinarians themselves realize that the procedure is harmful to cats and refuse to perform it. They are conscious of the pain that cats may suffer from after the operation and do not consider the surgery acceptable for pets.

Yes, they do! As all animals, cats have instincts including clawing objects. By doing so, they play, keep the nails sharp and mark their territory. Cats even use their claws for stretching. During the times before domestication, cats developed an instinct to scratch the bark on trees. Now scratching different subjects and surfaces, even though can cause a lot of damage to one’s property if not trained, is vital for satisfying cats’ natural instincts; therefore, it keeps cats healthy both physically and mentally.

Is declawing not a harmless procedure?

Before declawing your cat, it is necessary to understand how it is done and what are the possible consequences of this procedure. Besides removing the nails, it also involves 10 amputations of the last joint of each toe with a scalpel or guillotine clipper with general anesthesia. Complications of the surgery include adverse reaction to anesthetic; gangrene, which can lead to limb amputation; hemorrhaging; permanent nerve damage; persistent pain; reluctance to walk; scar tissue formation; sequestrum (bone chips), requiring additional surgery; and skin disorders. Basically, this simple at first glance surgery can deprive a cat of the ability to freely move around.

There is a risk that after declawing the nails may still grow but people will not see them because they will grow inside the paw instead of outside. In this case, a cat can suffer from great agony, while the reason of it will stay unnoticeable to others. Overall, declawing, in addition to weakening of limbs and back muscles, harms a cat’s balance in a way that interferes with their learned moving habits. In fact, cats have to learn walk, run, and jump all over again.

Because cats with amputated claws lose the ability to visually mark their territory, they may mark their territory in other, not so pleasant to their owners, ways outside the litterbox, even if they are well-trained. Declawed cats may be depressed, unsociable, and withdrawn or ill-tempered, aggressive, and impulsively unpredictable. It would be a huge mistake to think that it is safer for kids if they play with a declawed cat. Actually, without the ability to protect themselves with their claws, cats feel extremely insecure and consequently, they behave more belligerently and bite more often. One study published in the Journal of American Veterinary Medical Association (JAVMA) proved that approximately one-third of declawed cats developed at minimum one behavioral problems and 80 percent acquired one or more. In fact, declawed cats are seven times more likely to pee in inappropriate places. There is also a greater chance that cats will be surrendered to shelters if they are declawed. 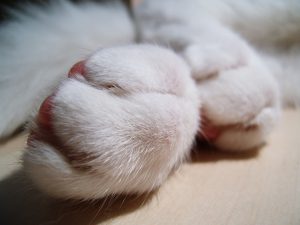 Options to replace declawing with and tips for training your cat

There are many ways to save your sofa without harming your cat. Your furniture will be safe if you are patient and train your cat. Here are some ways to deal with the issue without amputating your cat’s claws, bones and cartilage:

Order an Essay Just
in a few Clicks!
Send Us Your Inquiry